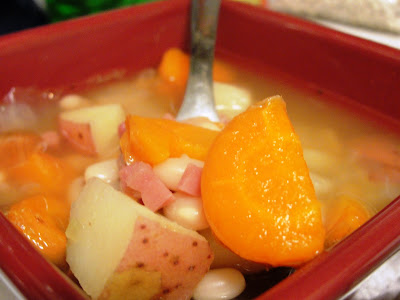 It's been a rough couple of weeks with slightly falling off the weight watchers wagon. Okay, maybe totally falling off the wagon if I have to be honest. A few pounds gained back. But I'm getting my mind back on track by deciding the best way to avoid going overboard with eating is to make dinners and desserts myself because I keep getting distracted by McDonalds on my way home from the train station.

Now combine that with the cooler weather that we've been having this week in Chicago and soup seemed the perfect dish to warm me up and get me back on track. I found this recipe in a book I've had sitting on my bookshelf for a few years now which I've never used until today.

I would recommend using a little more pepper than the recipe calls for as with all the lighter ingredients it does need a tiny little flavor kick. Overall, I liked this more than I would have thought considering I've never been a big fan of navy beans. I think I would make this again but would use more ham next time(can there ever be too much ham???).

In same pan, stir together beans, 4 cups water and remainder of ingredients. Bring too boil and reduce heat. Cover and simmer for 1 1/4 hours or until beans are tender. Discard bay leaves. Using a fork, slightly mash beans against side of saucepan to thicken soup a little. Sprinkle with additional pepper grinding if desired. 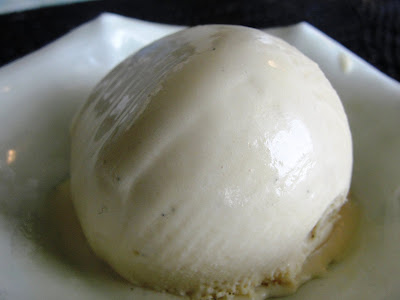 When it comes to Ice Cream, every day is a good day. I'm one of the only people in my immediate circle who can go to the store on a bitterly cold below zero degrees day and still want Ice Cream when I see it in the freezer display. I have David Lebovitz's Perfect Scoop and Ciao Bella's Gelato Book and I gaze up on them as fondly as I suspect I might with the White Sox winning another World Series (Next Year...For Sure).

This was beyond good for me (then again, I'm the one who is always happy when someone brings those maple leaf candies to work even if it is pure sugar). The only thing that would have made this better would have been the addition of some walnuts, or as the recipe suggested toffee bits,  but as I was in a hurry (read I needed a sugar fix bad) I didn't have the time to toast or carmelize the walnuts or go to the store for toffee bits both of  which would have made this so over the top I would still be in a sugar coma after having eaten the entire quart in one sitting.

In a heavy saucepan over medium heat, bring the cream to a simmer. In a bowl, whisk together the maple syrup, cornstarch, and egg yolks. Pour about one third of the hot cream into the egg yolk mixture, whisking constantly, then stir the egg yolk mixture into the remaining cream into the saucepan. Stir to blend well. Lower the heat to medium-low and heat, stirring constantly, until hot and slightly thickened. Do not boil. Pour through a mesh strainer into a clean bowl. Stir in the milk and vanilla. Cover and chill thoroughly.

Freeze in your ice cream machine following manufacturer's directions.
Makes 1 quart of maple ice cream.
Posted by Future Grown-Up at 7:00 AM No comments: 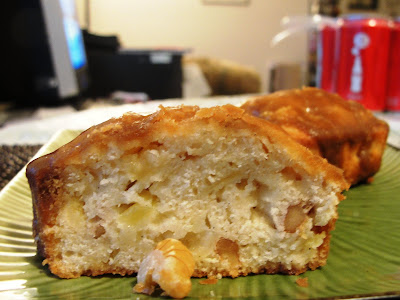 I ended up making this cake twice. Mostly because of a small little glitch in the glaze the first time around when I ended up melting a rubber spatula while stirring because the glaze had boiled up and gotten a lot hotter than I had expected it to. Naturally, this did not occur to me until after I'd had a piece of the cake, fortunately with no ill effects.
While I liked the first cake, it felt a little greasier than I would have liked from all of that oil. So when I remade the cake, I only used 1/2 cup of oil and substituted unsweetened apple sauce for the rest of the oil. I also went with mini square cakes but that was mostly because I have every intention of saving one more piece for myself and taking the other ten pieces to work tomorrow.Also, because of lack of bowl space, I ended up reversing some of the instructions and incorporated the egg mixture into the flour mixture with no ill effects.
My reaction to the revised cake...I actually liked the second cake a lot more. It helped that the brown sugar glaze wasn't toxic this time of course. But what I liked most about it was the fact that the apple sauce seemed to leave a more pronounced apple taste to the cake combined with the diced apple. I would definitely make this cake again using the substitution. Plus, I can rationalize eating more of the cake now that it's healthy for me with all of that fruit. :)

This was a great cake to end with from Southern Cakes.
Fresh Apple Cake with Brown Sugar Glaze
(Recipe from Southern Cakes by Nancie McDermott)
Fresh Apple Cake
3 cups all purpose flour
2 cups sugar
1 tsp baking soda
1 tsp salt
3 eggs
1½ cups vegetable oil
2 tsp vanilla extract
3 cups finely chopped apples
1 cup coarsely chopped pecans or walnuts
Brown Sugar Glaze
1 cup tightly packed light brown sugar
1/3 cup butter
1 tsp vanilla extract
2 tbsp evaporated milk, half-and-half or cream
Method – Fresh Apple Cake
Heat the oven to 350F. Grease a 13 by 9 inch pan or two 8-9 inch cake pans.
In a medium bowl combine the flour, sugar, baking soda and salt. Stir with a fork to mix everything together well.
In a large bowl, beat the eggs with a wooden spoon or a mixer at low speed until pale yellow and foamy. Add the oil and vanilla and beat well. Stir in the flour mixture with a wooden spoon and continue stirring the batter just until the flour disappears. Add the apples and nuts, stir to mix them into the batter until fairly uniform. Scrape the batter into the prepared pans.
Bake for 45-50 minutes or until the cake is golden brown, springs back when touched lightly near the centre and is beginning to pull away from the sides of the pan. Place the cake (still in the pans) on a wire rack and spoon over the glaze while still hot.
Method - Brown Sugar Glaze
Combine all the ingredients in a medium saucepan. Cook over medium heat, stirring often, until the mixture comes to a gentle boil. Then cook for 3-5 minutes.
To Finish
Spoon the hot glaze all over the hot-from-the-oven cake. Let the glazed cake cool completely before serving straight from the pan.
Posted by Future Grown-Up at 7:05 AM 4 comments: 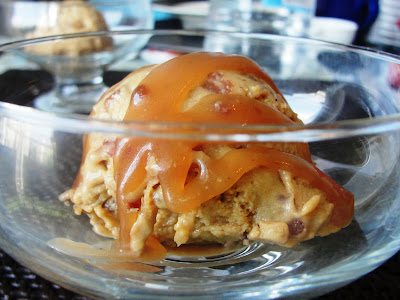 Bacon and I are back together.

Granted they're a bit tricky to include in Weight Watchers on a regular basis unless you decide to use your sister as a Guinea Pig for a bacon blow out weekend. And even then, you will eat too much and then sit down with yourself to have the "This has to stop...beginning Monday, we will eat like a grownup" speech said in a very firm no nonsense voice.

So I have had in one weekend way too much Ice Cream and Bacon and Caramel but I am okay with that. Just as long as I weigh in on Saturday instead of Thursday and be a very good girl the rest of the week.

Just a word of warning. This is a very sweet tasting ice cream. If I were to make it again (which would be dangerous unless I had more guinea pigs to eat most of it up for me) I would definitely cut back on the amount of sugar. The recipe called for 1 1/4 cups packed brown sugar but I think you could easily use 1 cup, maybe even of light, and still have a delicious recipe. The book called suggested using  a caramel bacon sauce but I think this recipe would do better with a different sauce..one perhaps with a bit of spice in it to contrast with all the sweetness in the Ice Cream.

Combine milk, cream and sugar in heavy sauce pan...it will froth up quite a bit so I would recommend going with a deeper saucepan than you might think you need. Cook over medium high heat until hot and sugar is completely dissolved, stirring occasionally.

Strain mixture into clean bowl and let cook completely, Stir in pecans and bacon and freeze in Ice Cream maker. Savor and enjoy!
Posted by Future Grown-Up at 7:00 AM 1 comment: 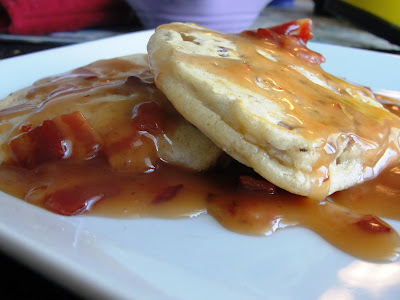 I have met the culinary cookbook love of my life.

I feel badly though. I used to think it was my book, "The Great Big Butter Cookbook." But after wandering around in a Borders Store dragged in there against my will by myself and nobody else, I found it. The book. The book of all books.


Seriously. How could anyone resist this book?

The first recipe I tried was Pecan Pancakes with...wait for it.....Caramel Bacon Sauce.

This is just divine. No other word for it. I mean the pancakes are really  good, and had I made it exactly like the recipe called for they would have been awesome. But this Caramel Bacon sauce goes beyond words for me. Just try it. You'll thank me for it.

Carefully stir in cream as it will bubble up.(Mine actually seized into a giant clump but dissolved once on the heat again). Return to heat and bring sauce to boil before removing from heat. Stir with spoon until smooth. Stir in butter, vanilla and rum or bourbon. Add bacon and serve warm. Sauce will keep in fridge for a few weeks and makes about 1 1/4 cups sauce.