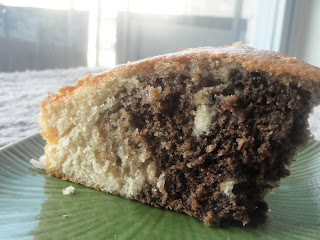 Zebra Cake
This months winning cake over at The Cake Slice was Zebra Cake. Which in theory, means that there should be even or semi even stripes of alternating chocolate and white cake.

Alas, not in my case.

I have some serious cake envy right now after having looked over the posts of those who had baked early. My poor sad mutant cake looks nowhere near as pretty as theirs. I had a suspicion that something might be amiss when the chocolate batter seemed thick but somehow, despite the fact that the regular batter was thin, somehow I rationalized that this was how it was supposed to be..that there had been some culinary magic thanks to a little cocoa powder. In hindsight, I realize now that this was really nothing more than my sad math skills trying to eyeball what a third of the batter meant and missing the quantity completely. And sure enough, when the cake baked up, there was a core center of chocolate and a uneven ragged outer portion of plain cake and that was about it. Fortunately, the cake was tasty enough between all that butter and oil so it was still eaten even if is the ugly stepsister of cakes.

I thought briefly of trying to re-bake to see if it would turn out any better, but with the heat wave we're having in the Midwest, I just could not make myself turn on the oven.  And although the cake was tasty, it wasn't so "wow, this is the cake of cakes" for me so I don't see myself making this again. So I'm hoping for a better result with next months cake.

Please check out the other bakers over at the Cake Slice who made their cakes look so much prettier and stripey than I did.

Method
Preheat the oven to 350F. Grease a 9 inch pan, line with a circle of parchment paper, grease the parchment and dust with flour. Combine the flour, baking powder and salt in a medium bowl.
Combine the eggs and sugar in a large mixing bowl and beat with an electric mixer on high speed until thick and pale, about 5 minutes. With the mixer on low speed, stir in the milk, butter, oil and vanilla, scraping down the sides of the bowl once or twice as necessary. Stir in the flour mixture, ½ cup at a time.

Transfer a third of the batter into another bowl and whisk in the cocoa powder.

Place a quarter cup of the vanilla batter into the centre of the pan and let it stand for a few seconds so it spreads out slightly. Place 2 tablespoons of the chocolate batter right on top of the vanilla and wait another few seconds until it spreads. Continue alternating vanilla and chocolate until you have used up all the batter and it has spread to the edges of the pan.

Bake until the cake is set and a toothpick comes out clean, about 40 minutes. Cool in the pan for 10 minutes. Run a sharp knife around the edge of the pan and invert the cake onto a cutting board. Peel away the parchment paper. Re-invert onto a wire rack and cool completely. Slice and serve.
Store uneaten cake in a cake keeper or wrap in plastic and store at room temperature for 3 days.
Posted by Future Grown-Up at 7:00 AM 6 comments: 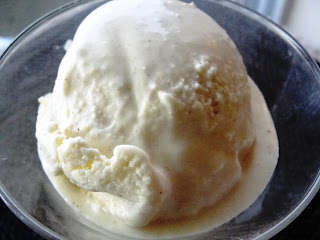 When I had the chance to go to San Francisco a few weeks ago, one of the first things I knew I had to do was go to Slanted Door at the Ferry Building. I thought I had been going to have the Shaking Beef but as it turns out, my destiny was actually to be introduced to Sweet Corn Ice Cream. It was one of those things that on my own on any average day, I might have actually turned it down because it really sounds a bit odd for an ice cream base. But on vacation, somehow, your culinary bravery rears its head and takes you down those foodie roads you wouldn't have ordinarily traveled.
When I figured the hot weather here in Chicago meant Ice Cream was in my future, I started digging around on the internet for a sweet corn ice cream recipe. And thanks to Rick Bayless, I found one that seemed close enough to the original to work for me. And except for the fact that the flavor wasn't as pronounced as the one I had in San Francisco - not Rick's fault but a lack of corn kernels on my part - I thought this was a really good runner up to the original dish.
The only thing that can be slightly off-putting about this recipe, both at Slanted door and this homemade version, is that it does tend to leave a minimally waxy feeling in your mouth after eating it. But for the sake of having another bowl, I'm going to be strong and overlook that sensation as soon as possible. I think the next time I make it I might cut back on the cinnamon a little as it did tend to overpower the dish very easily - although that could be a difference of opinion in what Rick Bayless and myself would call a scant half teaspoon of cinnamon.

So if you have any leftover corn from the holiday, definitely consider giving this recipe a shot. If you're an ice cream junkie like me, let me know what you think of it :)
Sweet Corn Ice Cream By Rick Bayless
http://www.rickbayless.com/recipe/view?recipeID=94
Recipe from Season 6 of Mexico - One Plate at a Time
Makes 1 1/2 quarts
Ingredients
2 to 3 ears fresh sweet corn
1 1/2 cups half-and-half
4 egg yolks
3/4 cup plus 2 tablespoons sugar
1 1/3 cups heavy cream
1/3 cup evaporated milk
A scant 1/2 teaspoon ground cinnamon, preferably Mexican cinnamon
2 tablespoon orange liqueur, preferably Gran Torres
1 tablespoon fresh lime juice
Directions
1.   Set up a double boiler.   Set up a 4-quart saucepan, filled halfway with water, into which you can nestle a 3-quart stainless steel bowl.  Bring the pot of water to a boil over high heat while you're preparing the custard base.
2.   Cook the base.   Husk the corn and pull off all the silk.  Cut the kernels from the ears and measure 2 cups.  Scoop into a blender and add the half-and-half.  Blend until smooth.  In the 3-quart stainless steel bowl, stir together the egg yolks and sugar until thoroughly combined. Add the corn mixture and whisk to combine thoroughly. Reduce the temperature under the pot of boiling water to maintain a gentle simmer.  Set the bowl of custard base over the simmering water and whisk frequently, until the mixture thickens noticeably, about 20 minutes.  The custard is sufficiently cooked when it reaches 180 degrees on an instant-read thermometer.  (You can also test it by dipping a wooden spoon into the custard, then running your finger through the custard:  if the line holds clearly, the custard has thickened sufficiently.)  Pour the base through a medium-mesh strainer into another bowl (preferably stainless steel for quick cooling).
3.   Cool the base.    Fill a large bowl halfway with ice. Nestle the custard into the ice and whisk regularly until completely cool.  Refrigerate if not using immediately.
4.   Finish the base, freeze the ice cream.  Stir the heavy cream, evaporated milk, cinnamon, orange liqueur and lime juice into the base.  Freeze in an ice cream freezer according to the manufacturer's directions. Scrape into a freezer container and freeze for several hours to firm.
Publish Post
Posted by Future Grown-Up at 10:31 AM 1 comment: 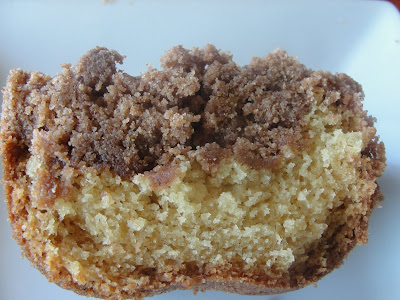 Having baked our way (or semi baked as was my case) through the Sweet Melissa cookbook, the consensus among the SMS bakers was that we were having too much fun baking and blogging to just stop The call was put out, the challenge was accepted and we have now begun our journey through "Baked Explorations."

I actually hadn't heard of the book before that. But I am nothing, if not flexible, when it comes to needing to buy a new baking cookbook especially when it is right at the time where I have a Barnes and Noble Gift Card burning a hole through my pocket. So it was with some happiness that I realized the first cookbook was a coffee cake considering how readily I will leap at the chance to attack any baked good with an obscene amount of streusel topping.

But to be on the safe side, I halved the recipe and hoped for the best. I used an odd little pan I'd bought a few months back that was touted as a mini monkey bread pan. Why I bought this, I'm not sure as I have never made monkey bread and probably never will, but it worked perfectly for this cake. Even with halving the recipe I still managed 5 of these mini cakes, one of which left me blissfully full.

This recipe adapted very well to gluten free flour, and was wonderfully moist when I baked it. Given the smaller pans, I cut the baking time back to 30 minutes which worked out well. And even though I did not wait nearly long enough (or anywhere near it ) to let this cool, it still held it's shape as I popped it out of the pan and began to devour it.

I would like to say that I shared this but can't. I did however freeze a couple of the mini cakes for a future sugar fix and am hoping to have one soon.

Please check out Karen's blog over at Karen's Cookies, Cakes and More for the recipe and swing by our Club Baked Blog when you have a chance to see how the other bakers fared with our inaugural recipe. 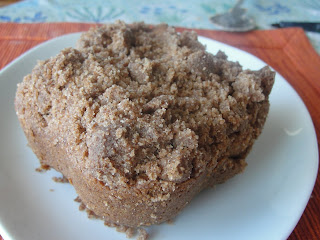