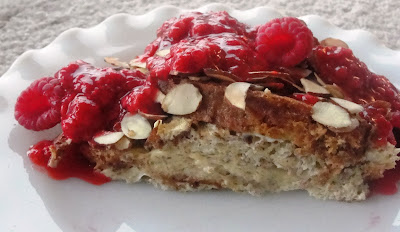 It's been awhile since I've been able to bake along with Club Baked. But, as I am a french toast girl at heart when it comes to breakfast, this seemed like a good recipe to get myself back into my baking state of mind. As I'm gluten sensitive, the only major change was to swap out gluten free bread for the challah. This unfortunately did add a bit of blandness to the dish especially since challah tends to be a rich buttery bread. I think that this could easily be rectified by using a flavored half and half to add a bit of a flavor punch. Give the fact that gluten free bread tends not to be the sturdiest bread in my opinion, it still held up fairly well under the overnight soak with the egg/milk/half and half mixture and I only had a few minor problems with turning the bread slices over the next morning.

I would try this again, just with a few tweaks. Definitely, the first would have to be more raspberry sauce (can there ever be enough of that?). In addition, I would like to try toasting the almonds before sprinkling them to give it a richer and nuttier flavor and add more cinnamon - although the recipe called for a 1/4 tsp I used a full tsp and thought it needed more.Overall, a good breakfast dish . For the recipe, please check out Julie's blog, "A Little Bit of Everything" to see how she fared and don't forget to check out the other bakers over at Club Baked for their valuable feedback on the recipe.
Posted by Future Grown-Up at 10:48 AM 1 comment: 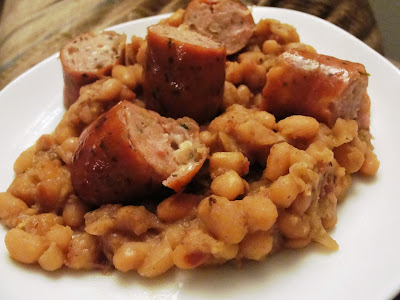 I had thought about not posting this recipe due to the...ahem...less than appetizing appeal of the photo. My fault in a couple of ways. I took the picture late at night when the lighting was bad and I slightly overcooked the beans thanks to my decision that cooking them on top of the stove was just as good as baking them in the oven AS THE RECIPE CALLED FOR (when will I ever learn) .  But having devoured a plateful I decided that photo or no photo, the recipe was too good not to be shared.

Given the fact that this was the first time I cooked with navy beans and the 8 hour soaking process, I'm pretty pleased with how they turned out. There's a delightful tangy sweetness to them thanks to the maple syrup and mustard with an underlying smokiness that in due entirely to me doubling the quantify of bacon called for (can there ever be too much bacon?). I would definitely make these again, maybe, just maybe, with following the directions this time.

Stir in remaining 1 cup water, 1/4 cup maple syrup and 2 tbsp of bourbon. Cover and bake for 1 hour or until beans are tender and liquid is almost absorbed. Stir in vinegar and salt. Yield: 6 1/2 cups.
Posted by Future Grown-Up at 7:00 AM No comments: