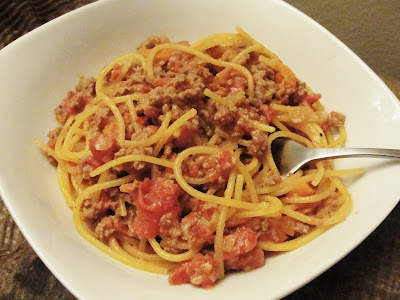 Sometimes, panic is a good thing. And by that, I mean when I'm frazzled from studying and figure it's time to take a break by doing some cooking to get out of the academic funk. I have always had a fondness for Pasta  Bolognese and somewhere in my collection of dusty, unused cookbooks is a different recipe (one that takes twice as long as this new version) which I always trot out when I want to impress .  But I also have a fondness for simplification especially when I have a paper to write and a test to study for. Given how simple this was to make, and how good it tasted, this might be my new favorite Bolognese recipe. Overall grade: A

Cook pasta and drain. Return to pot and add sauce, tossing to combine. Season with salt and pepper. Serves 4. 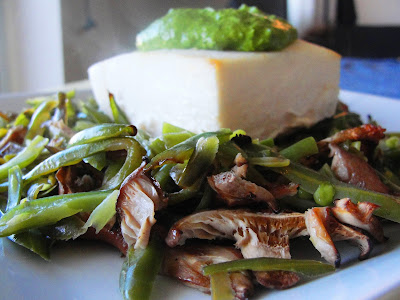 Thanks in part to a long weekend and some extra free time, I finally ran out of excuses and followed the trail of  imaginary bread crumbs back into the kitchen. As I've been relying way too much on prepackaged food and/or using ice cream for my dinners as of late, I'd had my eye on this for awhile in the hope of kick starting a healthier lifestyle. Sadly, this was cooked only because I was growing irritated with watching a baseball game but I'd like to think that getting this made at all is still a battle won. Overall, given my tendency to overcook fish, the green bean and mushroom blend was the biggest hit but this was still a quick, light Sunday lunch that I would make again as long as I had a kitchen timer on hand. Although the recipe calls for adding additional salt and pepper to taste to the vegetable medley and the cilantro sauce, I omitted it without any taste lost as a result. Overall grade B+.