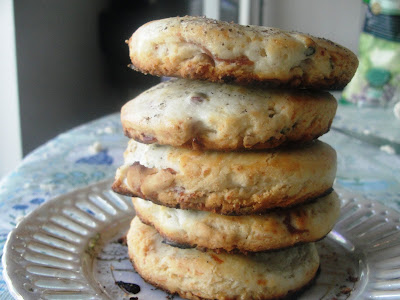 I love cooking for myself on some evenings. Because of that I can decide that I want to have biscuits for supper and there's nobody around to tell me that it's not a balanced supper or encourage me to pair it with more than just butter.
I've spent some time this evening trying to figure out how I could describe my baking efforts tonight. Biscuits just don't seem to work because they don't look anything like them. And while these do resemble a hockey puck, they don't taste like them at all. Actually, they taste quite good which one should always expect with bacon, cheese and buttermilk.I did make these with gluten free flour but I don't think that's what caused the biscuit pucks to fail to rise. I'm pretty sure that they are  as small as they are because I rolled the dough out too thin before cutting them out.
Seriously good biscuits/pucks though. Enough to motivate me to find something that would pair well with them and have a biscuit sandwich for tomorrows dinner too. 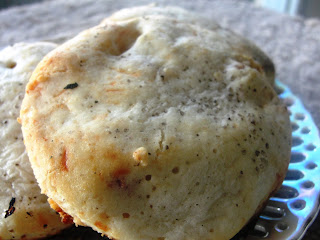 Whisk flour, sugar, baking powder and salt in large bowl to blend. Rub in butter with fingertips until mixture resembles coarse meal. Stir in fontina and sage, separating strands of cheese. Add 3/4 cup buttermilk and pancetta with pan drippings and stir until moist clumps form. Turn dough out into floured work surface and knead just until dough holds together, about 4 to 6 turns. Flatten dough to 3/4 inch thickness (totally missed the mark on that one!). Using floured 2 1/4 inch biscuit cutters, cut out rounds. Flatten dough to 3/4 inch thickness and cut out additional rounds until all dough isused.

Transfer biscuits to large ungreased baking sheets, spacing them apart. Brush biscuit tops with remaining buttermilk. Sprinkle with smoked salt (optional). Bake until biscuits are puffed and golden, about 14 minutes. Serve warm or at room temperature.
Posted by Future Grown-Up at 7:00 AM 1 comment: