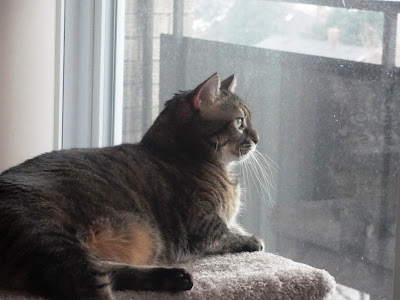 Happy New Year to all of you from me. And the human too. Who despite having slacked a lot this month on baking still redeemed herself with buying me this new perch thingy. But never fear, she has new cookbooks and a desire to try them out so expect yummy posts in 2011! 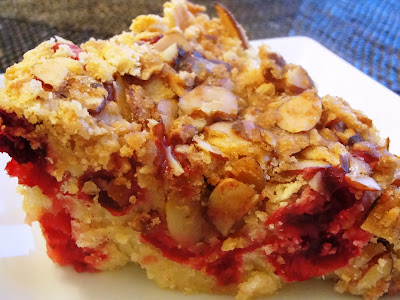 This month's recipe over at the Cake Slice Bakers was particularly festive and timely considering the holiday season. All those juicy red cranberries that just make everything look so pretty. That said, I was grumbling a bit when it was picked as I hadn't really wanted to make it (not that I remember what I voted for anyway now). I know this may strike horror into the hearts of cooking purists, but I've always been a  whole berry cranberry straight out of the can kind of gal. So cooking with fresh cranberries struck horror into MY heart.

There is something to be said for stepping outside of our comfort zone. The cake was a lot better than I had been willing to give it credit for when I knew it was the month's pick. Yes, there are some tart bites that you get when eating the cake but it's wonderfully blended with the sweetness of the cake. And the cake is beautifully moist. It went over very well at a staff holiday part I had gone to so thanks to my coworkers, I don't have to eat a great deal of this by myself (although I had been prepared to make the sacrifice).

Just a word of warning when it comes to making this...the batter as others have reported is a very thick one. And extra cooking time may be warranted depending on your oven - I cooked mine for another 20 minutes over what the recipe called for.

Adding this to my list of cake keeper cake's for sure.

Method – Streusel
Heat the oven to 300F. Grease a 10inch round springform pan.
Combine the butter, almonds and brown sugar in a medium bowl. Work the mixture between your fingers to form large crumbs. Refrigerate until ready to use.

Method – Cake
Whisk together the flour, baking powder and salt in a medium bowl. Combine the eggs and granulated sugar in a large mixing bowl and beat with an electric mixer on medium high speed until the mixture is lightened and increased in volume, about 5 minutes.

With the mixer on low speed, add the butter in a slow stream. Turn the mixer to medium speed and beat for another 2 minutes. Stir in the vanilla.

Gently but thoroughly fold in the flour mixture, half a cup at a time. Then stir in the cranberries.
Scrape the butter into the prepared pan, smoothing the top with a spatula. Sprinkle the streusel over the batter. Bake the cake until it is golden and a toothpick inserted in the centre comes out clean, about 1 hour to 1hour 10minutes.

Let the cake cool in the pan on a wire rack for 10 minutes. Release the sides of the pan and use a large spatula to slide the cake from the pan bottom onto the wire rack. Cool completely before cutting into wedges and serving.

Store uneaten cake in a cake keeper or wrap in plastic and store at room temperature for up to 5 days. 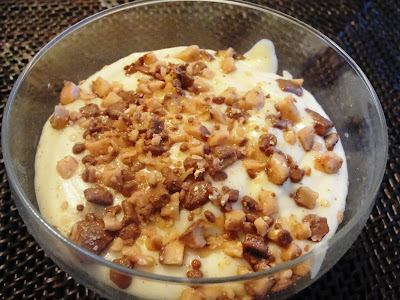 I'm not normally a big vanilla pudding person.  Give me butterscotch or pistachio or lemon any time. But what I am is a woman who when she needs dessert, needs it now and as recipes went, this was a simple and easy one to put together with what I had in the house. And life is always better with English toffee bits after all.
Since I had no milk in the house, I substituted Half and Half for a very rich and creamy pudding. This would have been perfect with some whipped cream, but in lieu of that sprinkling English toffee bits on top made for a nice flavor contrast. Even if this wasn't one of my favorite pudding flavors, it was still a satisfactory, flavorful pudding that did the job on a cold fall evening. 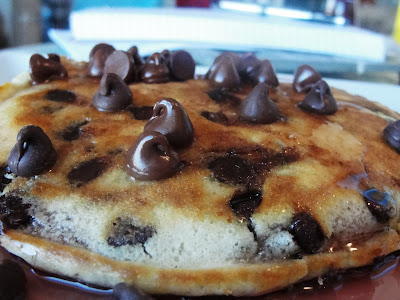 I woke up last Sunday morning with a craving for McDonald's McGriddles. Not so much that they're what I want (although they are yummy) but they are convenient since I live a block away and most weekends wake up feeling too lazy to cook. But in my effort to eat more mindfully (eat what I make as much as possible), I started googling away and came up with this lovely treat which was a great way to start my Sunday morning off on. I used Ghirardelli chocolate chips in the recipe and it was just sublime.After getting halfway through the prep I also realized I had no milk so I substituted half and half instead.

Overall, this is a great recipe. At first, the pancakes seem ordinary but then the buttery goodness hits the tongue followed up by a whollop of chocolate to seal the deal. I liked them. I would probably add a hint of cinnamon the next time just because cinnamon would give a  tiny spicy warm bite to the batter and as a great plus would pair well with the chocolate.

In a small saucepan, combine the butter and milk. Place over low heat just until warm and the butter is melted. Let cool slightly. In a bowl, combine the flour, sugar, baking powder, and salt; mix well.
In a large bowl, whisk the eggs with a fork. Whisk in the milk mixture. Add the dry ingredients and mix just until barely blended. Add the chocolate chips and mix.
Heat a griddle or large skillet over medium heat. Add about 1 teaspoon of butter and melt until bubbly. Ladle 3 tablespoons of batter for each pancake onto the hot surface and cook until bubbly on the top and golden brown on the bottom. Turn and cook until golden brown on the other side, about 30 seconds more. Repeat until all the batter is used up. Serve hot.
Posted by Future Grown-Up at 7:00 AM No comments: