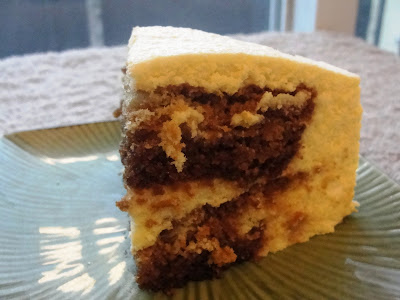 Life got in the way for a couple of months which meant I missed out on making some delicious cakes with my fellow bakers over at The Cake Slice. And given the fact that there's a whole lot of nothing going on because I'm sick, I figured for awhile that this was going to be a month I missed again which would have been a shame as I love love love Tiramisu.

As cakes go, this was pretty good. It's not the time of cake to bake on a whim...in fact, I ended up baking it two days before everything else and it still turned out well. The only major substitution I made was to use gluten free flour due to a gluten sensitivity in the house and that worked much better than I had expected especially with a genoise base cake.

Overall, I'm glad I tried it but I"m not sure I'd make it again. It was a bit of a complicated cake but a delicious one. My main problems were in not listening to the instructions...when it said to whip the marscapone for 30 seconds, I didn't think that was long enough and whipped it a little longer which ended up giving it a curd like texture for awhile until the rest of the ingredients were added. Also, I used a springform pan just a little bigger than the cake which may have been the reason for the uneven layer of frosting.

Overall Grade B+
Posted by Future Grown-Up at 7:47 AM 5 comments: